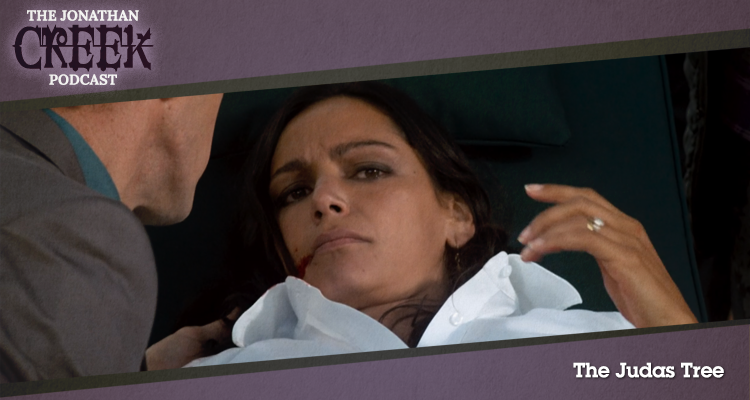 The Judas Tree was the second of three Jonathan Creek specials between the fourth and fifth seasons. When a young woman’s sanity comes under threat, Jonathan and Joey must separate truth from fiction. In this podcast Gerry and Iain contemplate forming a band comprised entirely of dog whistles.

Hugo and Harriet Doré (Paul McGann and Sasha Behar) have vengeance on their minds when Emily (Natalie Walter) comes to work at their home. Despite the guidance of Mrs Gantry (Doreen Mantle), Emily begins to fear the memory of a previous occupant of her bedroom, the murderer Selima El Sharad (Sofia Hayat). There is a supporting role for the great Ian McNeice as the tragic Father Roderick Alberic.

The Judas Tree was written by David Renwick and he continued in the director’s chair. Rosemary McGowan began an as-yet-unbroken stint as producer in this episode.

The Judas Tree was released in 2010. It is 94 minutes long and originally aired on the BBC. The episode is available in an edited format on Netflix in the UK and Ireland, and the entire series is available on DVD in the UK and other countries, including a comprehensive box set of all the episodes up until Christmas 2016, released by the BBC.