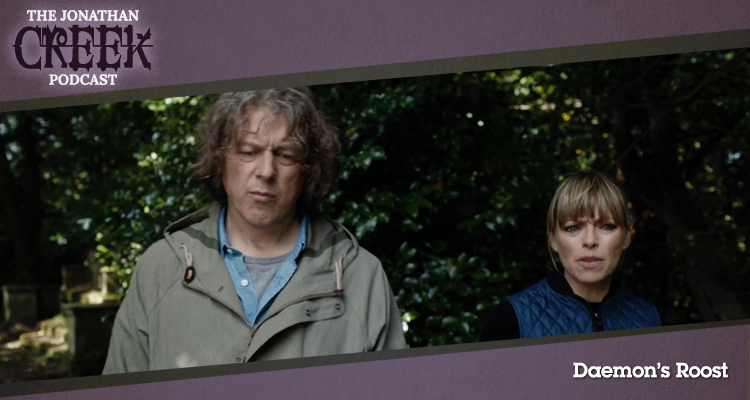 Daemon’s Roost was the final episode of Jonathan Creek’s run (so far). A mysterious Gothic mansion conceals a number of disturbing secrets. In this podcast Gerry and Iain wonder how you would casually burn some guy to death with no repercussions.

Mysteries of the distant and recent past, along with present concerns, occupy Jonathan’s attention in the most recent Jonathan Creek special. With assistance from the Rev. Wendell Wilkie (Warwick Davis), Jonathan probes the case of a young woman named Alison Belkin (Georgie Lord) whose mother and sisters died without explanation in a home famed for the unsolved deaths of many men a century earlier. She is newly married to Stephen Belkin (Emun Elliott), who previously made Jonathan’s acquaintance when accused of murdering his first wife, Imelda (Nicole Cooper).

Also on the scene are Mr Ryman (Jason Barnett), a security camera installer; Phillipa Teller (Rosalind March), carer for the proprietor; and the proprietor himself, filmmaker Nathan Clore (Ken Bones). Meanwhile Jonathan is being pursued by Patrick Tyree (Ryan Oliva) – a man he put in jail – with Polly and her friend Nina (Jo Martin) preoccupied by a local scarecrow competition. DS Alben Barkley (Chris Forbes) offers advice at a critical stage.

Daemon’s Roost was written by David Renwick and directed by the returning Sandy Johnson. Rosemary McGowan continued as producer.