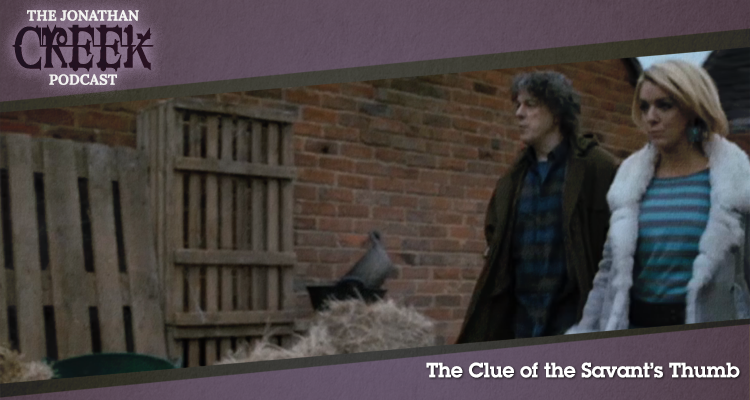 The Clue of the Savant’s Thumb was the last of three Jonathan Creek specials between the fourth and fifth seasons. Life has changed for Jonathan, but can Joey persuade him to solve one more mystery when a friend dies in bizarre circumstances. In this podcast Gerry and Iain contemplate giving up podcasting to wear suits and work in an office on tasks completely divorced from our known skills.

Rosalind Tartikoff (Joanna Lumley) has more than one death to concern herself with as she comes to terms with both a childhood trauma and the inexplicable disappearance of her husband Franklin’s dead body (Nigel Planer) from a locked room.

The Tartikoff’s adopted daughter Fariba (Hasina Haque) and her partner Brad (Mark Frost) play their part in prolonging the mystery, while family GP Peter Churchill (Michael Lumsden) has much to regret. This episode is perhaps best remembered as the one in which Jonathan’s new wife Polly (Sarah Alexander) is introduced.

The Clue of the Savant’s Thumb was written by David Renwick and he made his third and (so far) final visit to the director’s chair, along with a brief cameo as a TV interviewer. Rosemary McGowan continued as producer.

The Clue of the Savant’s Thumb was released in 2013. It is 90 minutes long and originally aired on the BBC. The episode is missing from the collection on Netflix in the UK and Ireland, however the entire series is available on DVD in the UK and other countries, including a comprehensive box set of all the episodes up until Christmas 2016, released by the BBC.