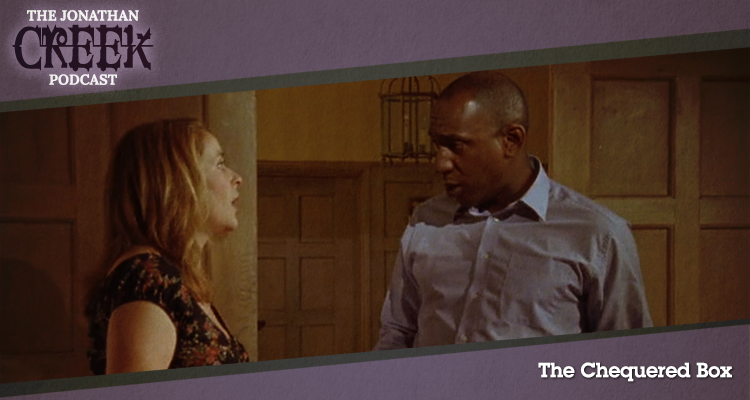 The Chequered Box was the penultimate episode of Jonathan Creek‘s fourth season. When a top police officer is witnessed at the scene of a gruesome murder, Jonathan and Carla search for an alternative explanation. In this podcast Gerry and Iain ponder the dynamics of mobile toileting.

Inspector Fell (Colin McFarlane) and his colleague Herbie Bryant (Steve Speirs) are hot on the heels of justice after the unexplained death of a bookmaker, with Carla in tow filming a fly-on-the-wall documentary. Fell’s swift thinking impresses Carla as he explains this death effortlessly, but things take a sinister turn when journalist Hattie Baron (Myra McFadyen) witnesses him at the scene of a brutal murder.

The Chequered Box was written by David Renwick and the ubiquitous Sandy Johnson remained in the director’s chair (along with a brief cameo appearance as an A&E doctor). Verity Lambert remained as producer.

The Chequered Box was released in 2004. It is 60 minutes long and originally aired on the BBC. The episode is available in an edited format on Netflix in the UK and Ireland, and the entire series is available on DVD in the UK and other countries, including a comprehensive box set of all the episodes up until Christmas 2016, released by the BBC.