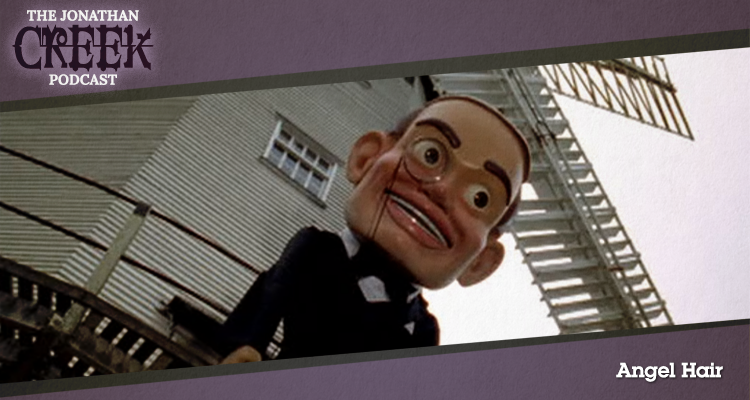 Angel Hair was the second episode of Jonathan Creek‘s fourth season. A famous composer and his pop star wife are shocked by a woman’s ability to re-grow her hair in just 48 hours. In this podcast Gerry and Iain take a look at the challenges of combining hostage-taking with time travel and what to do with a 12-foot tall ventriloquist’s dummy.

The principal guests in this episode were Jack Dee as love rat Dudley Houseman and Sophie Thompson as his PA, Dorothy. They were supported by Caroline Carver as Dudley’s wife Sally Ellen Oakley, Trevor Peacock as Dudley’s father and dummy-maker Henry Houseman and Tamsin Greig as Pam, a make-up artist and stylist who Jonathan spends some time with during the show. David Renwick makes a cameo appearance during the kidnapping scene.

Angel Hair was written by Renwick and Christine Gernon once more directed, while Verity Lambert remained as producer.

Angel Hair was released in 2003. It is 60 minutes long and originally aired on the BBC. The episode is available in an edited format on Netflix in the UK and Ireland, and the entire series is available on DVD in the UK and other countries, including a comprehensive box set of all the episodes up until Christmas 2016, released by the BBC.