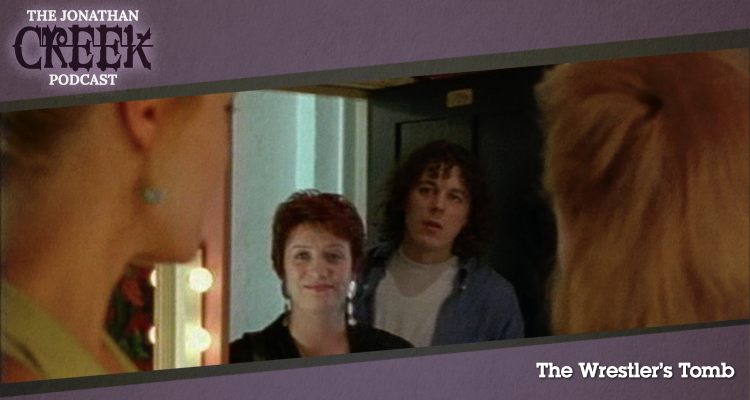 The Wrestler’s Tomb was the first episode of Jonathan Creek’s inaugural season and introduced audiences to Alan Davies in the title role, alongside Caroline Quentin as the show’s co-lead. In this podcast Gerry and Iain take a look at the plot, characters, actors and others involved in the creation of The Wrestler’s Tomb.

Besides Davies and Quentin’s protagonists, this episode featured a number of other important characters. Former Doctor Who Colin Baker appeared as the victim, Hedley Shale, with Saskia Mulder (now a leading agent at The Artists Partnership) as his killer, Francesca Boutron. There were important roles, too, for Anthony Head as Creek’s employer Adam Klaus, Sheila Gish as the abruptly widowed Serena Shale and Jane Hazelgrove as the victim’s lover Katrina Toplis.

Supporting the main cast were Lloyd McGuire as DS Davey, Mem Ferda as an engaging drunk, John Marquez as a frazzled supermarket manager whose tills have been taken to task by Jonathan’s mental arithmetic and Rebecca Charles as a swiftly-disposed-of love interest of Klaus early in the show.

Like all of the others to come, this episode was written by the show’s creator, David Renwick. The director was Marcus Mortimer in the first of his three Creek episodes behind the camera, while Susan Belbin produced the episode.

The Wrestler’s Tomb was released in 1997. It is 89 minutes long and originally aired on the BBC. An abridged edition can be viewed on Netflix in the UK and Ireland and the original cuts are available on DVD in other countries, including a comprehensive box set of all the episodes up until Christmas 2016 released by the BBC.