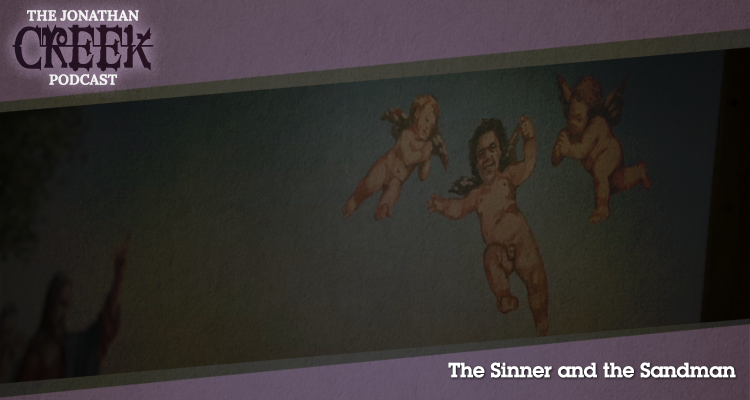 The Sinner and the Sandman was the second episode of Jonathan Creek’s fifth season. A seemingly impossible prediction from a much-maligned magician has the whole village stumped. In this podcast Gerry and Iain consider scavenging for lottery tickets.

Elsewhere, Rev. Hugh Chater (James Bachman) and his wife Alison (Selina Griffiths) are concerned at the dissemination of local secrets in the parish newsletter produced by Horace Greeley (John Bird) and a recurring nightmare triggers a painful memory for Polly.

The Sinner and the Sandman was written by David Renwick and directed by David Sant. Rosemary McGowan continued as producer.

The Sinner and the Sandman was released in 2014. It is 58 minutes long and originally aired on the BBC. The episode is available on Netflix in the UK and Ireland and the entire series is available on DVD in the UK and other countries, including a comprehensive box set of all the episodes up until Christmas 2016, released by the BBC.