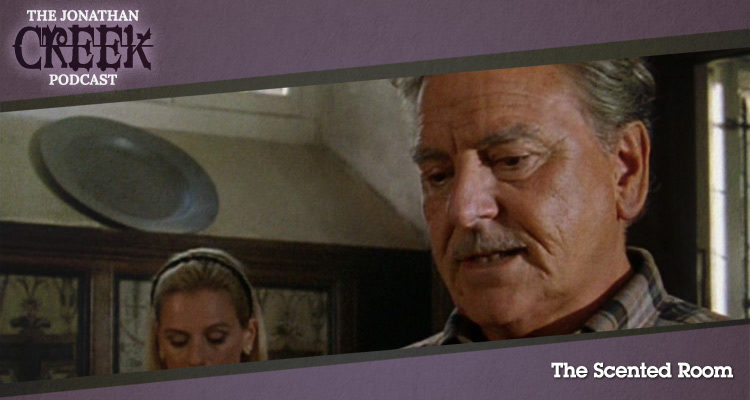 The Scented Room was the third episode of Jonathan Creek’s second season and featured an impossible theft from a locked, empty room. In this podcast Gerry and Iain take a look at the essentials of good parenting and the appearance of a national treasure.

This episode featured veteran comic Bob Monkhouse as Sylvester Le Flay, a newspaper critic with no love for Adam Klaus (Stuart Milligan) and Jonathan’s magic show, with Christine Kavanagh as his wife, Lady Theresa Cutler and Sam Bradley as their son, Benjamin. Peter Copley and Valerie Colgan played Eric and Martha, staff at the stately home where the family live.

Supporting the main cast were Caroline Harris and Jemma Churchill as Maddy’s therpist and a colleague, Sophie Langham as Melissa, the mastermind nanny behind the crime, and John Hudson as a man who thinks works for the police, not the gas board.

The Scented Room was again written by the show’s creator, David Renwick. Sandy Johnson remained in charge behind the camera, while Verity Lambert continued as producer.

The Scented Room was released in 1998. It is 50 minutes long and originally aired on the BBC. A version of the episode can be viewed on Netflix in the UK and Ireland and the original cuts are available on DVD in other countries, including a comprehensive box set of all the episodes up until Christmas 2016, released by the BBC.