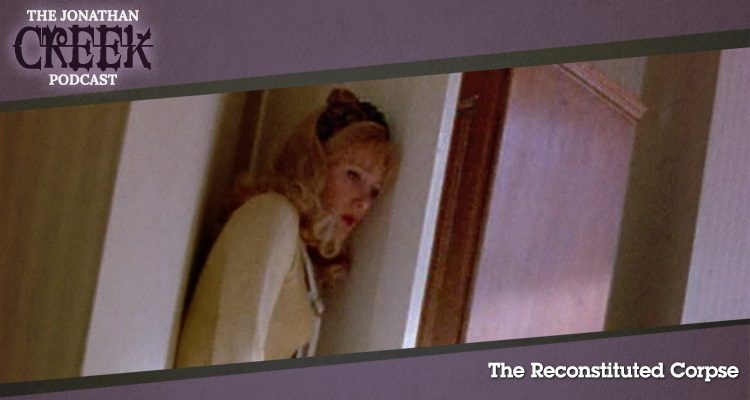 The Reconstituted Corpse was the third episode of Jonathan Creek’s first season and featured a seemingly impossible scenario involving a dead body and a locked wardrobe. In this podcast Gerry and Iain take a look at the late-1990s equivalent of online dating and a nasty break-up.

When Zola Zbzewski (Kika Mirylees) is confronted by her former partner (and plastic surgeon) David Churchin (Ron Berglas) on Cleo Paterson’s (Hilary Lyon) chat show she reaches the unfortunate conclusion that he will never let her live in peace and permanent action is required. When she is arrested for his murder her daughter Victoria (Rebecca Johnson) and agent  Sam Brickman (Philip McGough) call for Maddy’s help and an alibi swiftly becomes apparent.

The Reconstituted Corpse was again written by the show’s creator, David Renwick. The director was once more Marcus Mortimer in the last of his three episodes, while Susan Belbin remained as producer.

The Reconstituted Corpse was released in 1997. It is 59 minutes long and originally aired on the BBC. An abridged edition can be viewed on Netflix in the UK and Ireland and the original cuts are available on DVD in other countries, including a comprehensive box set of all the episodes up until Christmas 2016, released by the BBC.