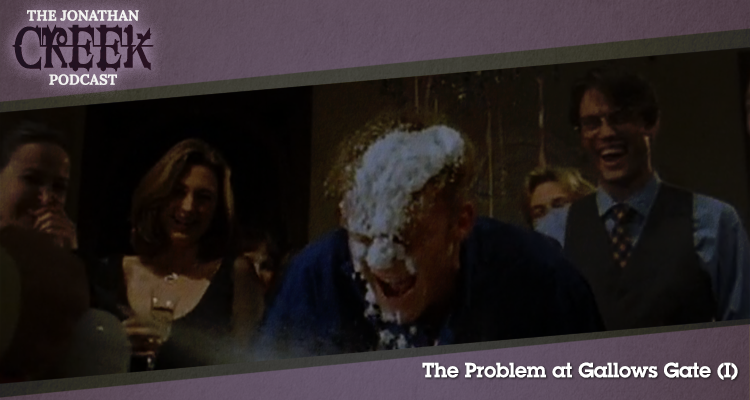 The Problem at Gallows Gate Part I was the fourth episode of Jonathan Creek’s second season and featured a dramatic suicide, followed by the dead man apparently committing an horrific murder. In this podcast Gerry and Iain take a look at the ethics of pretending to be blind.

This episode was the first of a two parter and featured Rogue One and The Night Manager star Alistair Petrie as birthday boy Duncan Proctor; Annabel Mullion as Felicity, the ill-fated object of his affections; Jessica Lloyd as Felicity’s osteopathic housemate Clare; Stephen Billington as Neville, the wrench in Duncan’s works; Clarke Peters as not-as-blind-as-he-looks musician Hewie Harper; Stanley Townsend as sarcastic police inspector Barrison; and Jennifer Piercey as Adam Klaus’ sister Kitty.

The Problem at Gallows Gate Part I was again written by the show’s creator, David Renwick. Keith Washington made his directorial debut on the show, while Verity Lambert continued as producer.

The Problem at Gallows Gate Part I was released in 1998. It is 49 minutes long and originally aired on the BBC. The episode can be viewed on Netflix in the UK and Ireland and the entire series is available on DVD in the UK and other countries, including a comprehensive box set of all the episodes up until Christmas 2016, released by the BBC.