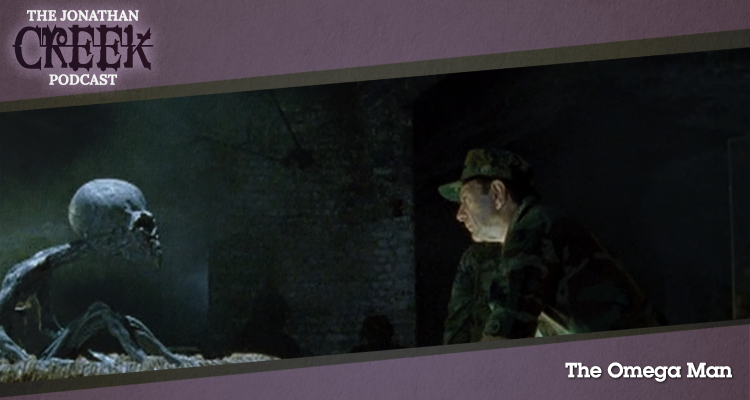 The Omega Man was the third episode of Jonathan Creek’s third season. This episode featured aliens from another dimension, US Military overreach and some serious ethical questions. In this podcast Gerry and Iain take a look at truth and whether it’s out there, or all around. (Wait, is that truth, or love?)

When Maddy receives an intriguing invitation to meet a stranger in an abandoned warehouse she inevitably cannot resist and comes face to face with Professor Lance Graumann (John Shrapnel) and his assistant Phillipa Farell (Jane Booker). Before she knows what is really going on a delegation of US Military officers led by Cpt. Frank Candy (Michael Brandon) arrive to take possession of what appears to be an alien corpse.

There was a small role for future EastEnders stalwart Charlie Brooks as Trudi, a Jonathan Creek fangirl.

The Omega Man was again written by the show’s creator, David Renwick. Keith Washington directed once more while Verity Lambert remained as producer.

The Omega Man was released in 1999. It is 50 minutes long and originally aired on the BBC. The episode can be viewed on Netflix in the UK and Ireland and the entire series is available on DVD in the UK and other countries, including a comprehensive box set of all the episodes up until Christmas 2016, released by the BBC.