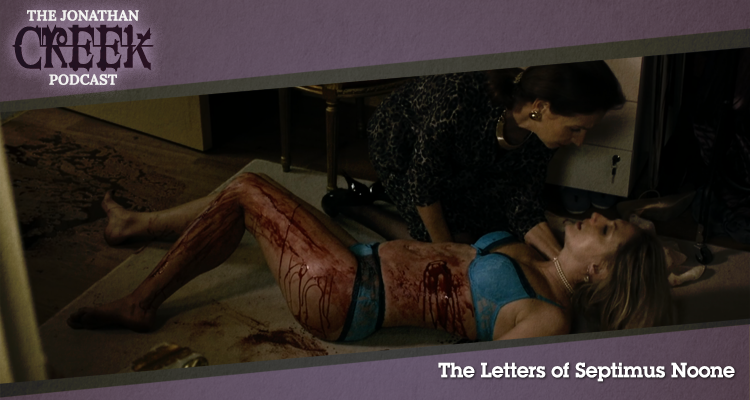 The Letters of Septimus Noone was the first episode of Jonathan Creek’s fifth season. When a musical theatre star falls gravely ill in impossible circumstances, can Jonathan avoid being sucked into the investigation? In this podcast Gerry and Iain consider appointing a vigorous young sidekick with all the wrong ideas.

When West End diva Juno Pirelli (Ali Bastian) is stabbed by a colleague’s jealous girlfriend (Alice O’Connell), her decision to cover up the crime with the help of make-up genius Darryl (Rhydian Jones) leads to an inexplicable situation as theatre impresario Zelda Niedlespascher (Marianne Borgo) finds her in a locked room having apparently recently sustained the near-mortal blow.

Meanwhile, the death of Polly’s father leads to the discovery of some concerning letters and a lot of explaining to do for her late mother’s friend Hazel (Paula Wilcox). Speaking of friends, a visit to see Sharon (Raquel Cassidy) and her imaginative child Ripley (Liberty Nichols-O’Connell) leads to more drama and Jonathan acquires an assistant in the shape of Ripley’s older brother Ridley (Kieran Hodgson).

The Letters of Septimus Noone was written by David Renwick and directed by series newcomer David Sant. Rosemary McGowan continued as producer.

The Letters of Septimus Noone was released in 2014. It is 59 minutes long and originally aired on the BBC. The episode is available on Netflix in the UK and Ireland and the entire series is available on DVD in the UK and other countries, including a comprehensive box set of all the episodes up until Christmas 2016, released by the BBC.