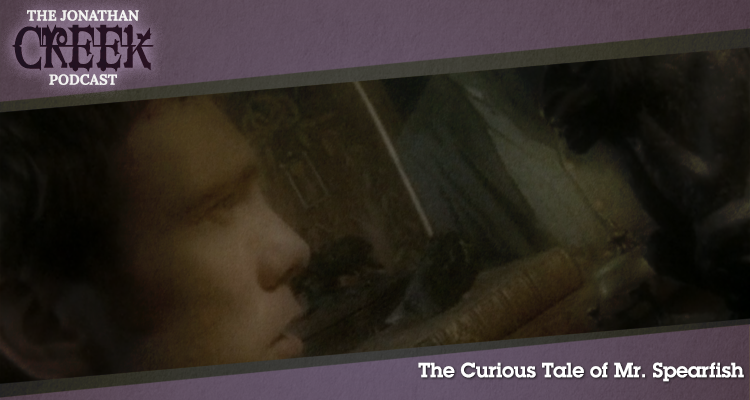 The Curious Tale of Mr. Spearfish was the first episode of Jonathan Creek’s third season. The episode featured a dark contract and some dark deeds. In this podcast Gerry and Iain take a look at why money cannot solve all ills.

Andrew Tiernan featured as the titular Mr. Lenny Spearfish, a man whose luck turns on a dime when he signs his soul away to a mysterious man in a curiosity shop. His troubled wife, Alice, is portrayed by Rachel Power while there are significant cameos for Adjoa Andoh as a guardian angel type figure and for Griff Rhys Jones as a prosecutor as Adam Klaus goes to trial in the episode’s B-plot.

There is a small role for a young Maxine Peake as a hotel cleaner exposed for blackmailing high profile guests, while Debbie Arnold and Brett Fancy also appear.

The Curious Tale of Mr. Spearfish was released in 1999. It is 50 minutes long and originally aired on the BBC. The episode can be viewed on Netflix in the UK and Ireland and the entire series is available on DVD in the UK and other countries, including a comprehensive box set of all the episodes up until Christmas 2016, released by the BBC.