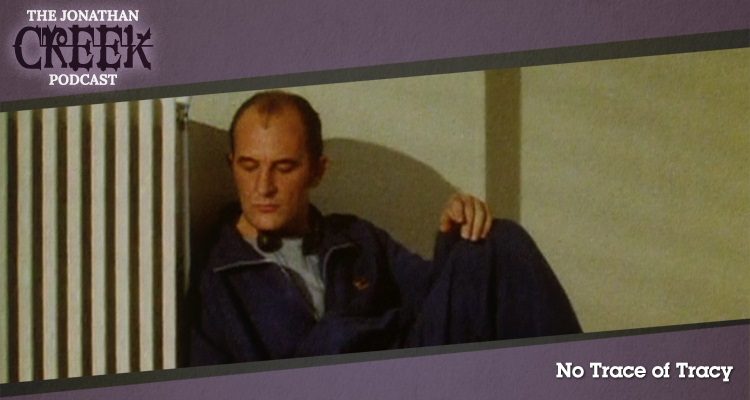 No Trace of Tracy was the fourth episode of Jonathan Creek’s first season and featured a mysterious case of a girl who walked through a doorway and disappeared. In this podcast Gerry and Iain take a look at tree-worshipping, ark building and faded rock stars.

Roy Pilgrim (Ralph Brown), the ageing front man of 70’s rock band Edwin Drood, returns from a run to find his patio doors ajar and his safe opened. Before he can appraise the situation he is knocked unconscious and wakes to find himself chained to his radiator, leading to a long wait for rescue. Meanwhile teenage fan Tracy Cook (Heather-Jay Jones) is on her way to Pilgrim’s home, believing he has agreed to meet her.

When Tracy disappears police attention is immediately focussed on Pilgrim, who maintains his seemingly implausible alibi which, if true, would mean he was staring at the patio door that witnesses saw Tracy enter before she vanished. Ray is offered support by members of a cult he financially contributes to, particularly their leaders Jacob and Polly Flowers (Mel Cobb and Christine Moore).

Jonathan and Maddy are aided (hindered?) in their efforts to figure the case out by Maddy’s friend Sheena (Caroline Loncq), who takes a bit of a shine to Jonathan, while real-life rockers Lou Sexty and Hank Wangford portray Ray Pilgrim’s former bandmates Jerry and Glenn. Rob Jarvis and James DeGazio also appear as Tex (a frustrated pizza-toting musician) and Toby Flowers (‘nephew’ of Jacob and Polly) respectively. Geraldine Alexander appears as Ray’s furious fiancée Francine.

No Trace of Tracy was again written by the show’s creator, David Renwick. There was a change of director with Sandy Johnson taking the helm, while Susan Belbin remained as producer.

No Trace of Tracy was released in 1997. It is 59 minutes long and originally aired on the BBC. An abridged edition can be viewed on Netflix in the UK and Ireland and the original cuts are available on DVD in other countries, including a comprehensive box set of all the episodes up until Christmas 2016, released by the BBC.