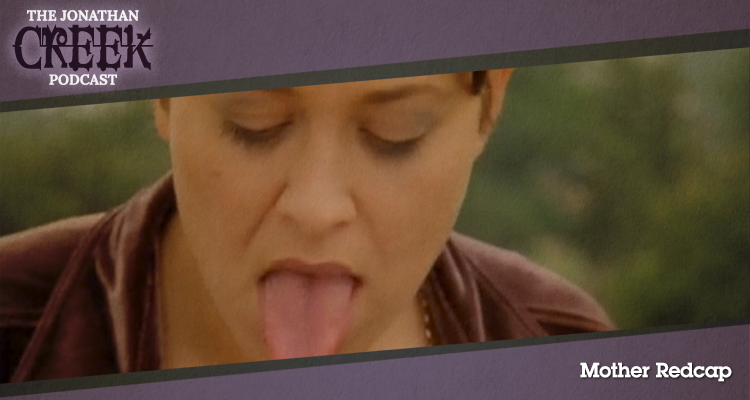 Mother Redcap was the sixth and final episode of Jonathan Creek’s second season and featured both an impossible murder and a fascinating historical mystery. In this podcast Gerry and Iain take a look at table manners and sisterly vengeance.

The undoubted highlight of this episode was the performance of Brian Murphy as Ken Speed, a veteran police officer. Victim Judge Forrest Sweetland and his wife Gwynneth were played by Leonard Kavanagh and Georgine Anderson respectively, while Nicola Walker portrayed the salad-licking PC Fay Radnor.

Supporting performances came from Barbara Horne as Dr Climpson, Marcus Gilbert as Jason Tippet and both Scarlett O’Neal and Hilary Sesta as the younger and present-day versions of the Mother Redcap accomplice-turned-bag lady.

Mother Redcap was again written by the show’s creator, David Renwick. Keith Washington continued behind the camera, while Verity Lambert remained as producer.

Mother Redcap was released in 1998. It is 49 minutes long and originally aired on the BBC. The episode can be viewed on Netflix in the UK and Ireland and the entire series is available on DVD in the UK and other countries, including a comprehensive box set of all the episodes up until Christmas 2016, released by the BBC.