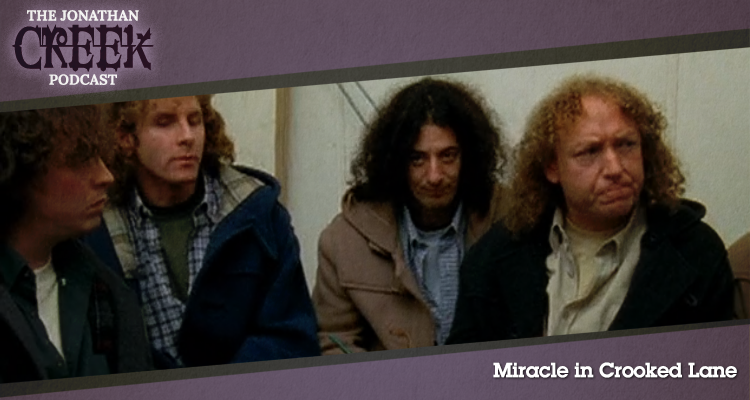 Miracle in Crooked Lane was the fifth episode of Jonathan Creek’s third season. This episode featured a woman spotted alive and well just hours after an ultimately fatal accident. In this podcast Gerry and Iain take a look at the risks of becoming too obsessed with Jonathan Creek.

Vincent Rees (Nicholas Ball) and his inscrutable house guest Kathleen Gilmore (Dinah Sheridan) are at the centre of events as Jacqui Clifford-Wright (Hetty Baynes) appears to Kathleen hours after her apparent death at the home she shared with her husband Rupert (Benjamin Whitrow). Jonathan and Maddy are drawn into the mystery by Creek superfan Jeff (Tom Goodman-Hill) and his partner Christine (Emma Kennedy).

Miracle in Crooked Lane was again written by the show’s creator, David Renwick. Richard Holthouse directed the second of his three episodes while Verity Lambert remained as producer.

Miracle in Crooked Lane was released in 1999. It is 50 minutes long and originally aired on the BBC. The episode can be viewed on Netflix in the UK and Ireland and the entire series is available on DVD in the UK and other countries, including a comprehensive box set of all the episodes up until Christmas 2016, released by the BBC.