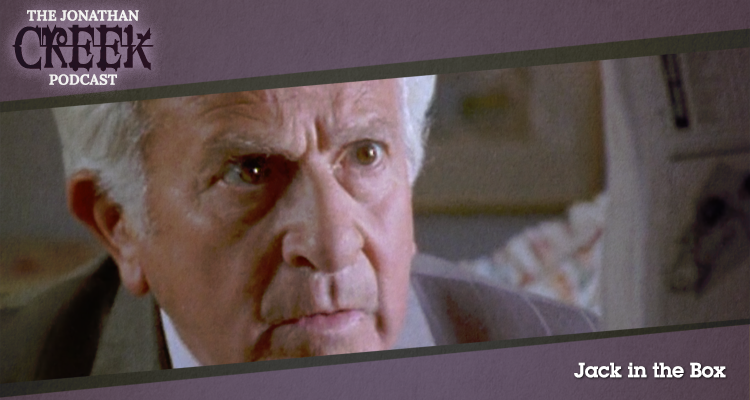 Jack in the Box was the second episode of Jonathan Creek’s first season and featured a classic ‘locked room’ mystery with a twist. Or was it a flush? In this podcast Gerry and Iain take a look at a seemingly impossible challenge for Jonathan.

The ‘Jack’ referred to in the episode’s title was, of course, Jack Holiday, portrayed by John Bluthal. His wife, Kirsten (Maureen O’Brien), refuses to accept his death was the seemingly apparent suicide his killer made it out to be and accepts Jonathan’s help in solving the puzzle. Meanwhile, Maddy celebrates overturning a miscarriage of justice having helped set Alan Rokesmith (Robin Soans) free after many years in prison.

There were important supporting appearances for June Watson as Alan’s sister Rachel, Bernard Kay as Kirsten and Jack’s butler-cum-assistant Oliver and Colin Stinton as Scott Resiner, a producer at the film company who produced Jack’s final TV advert.

This episode was also written by the show’s creator, David Renwick. The director was again Marcus Mortimer in the second of his three Creek episodes behind the camera, while Susan Belbin continued as producer.

Jack in the Box was released in 1997. It is 59 minutes long and originally aired on the BBC. An abridged edition can be viewed on Netflix in the UK and Ireland and the original cuts are available on DVD in other countries, including a comprehensive box set of all the episodes up until Christmas 2016, released by the BBC.