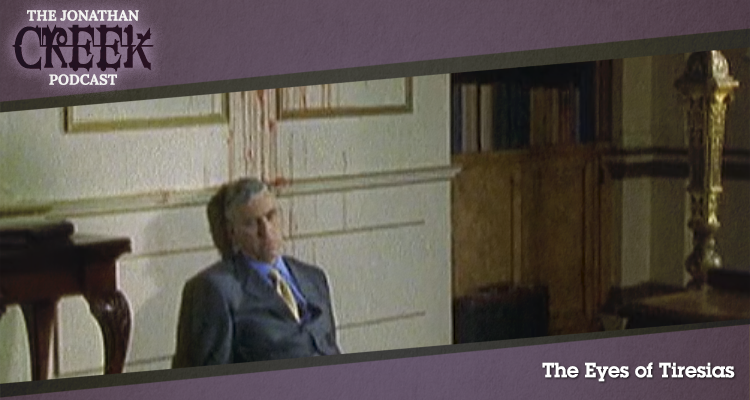 The Eyes of Tiresias was the second episode of Jonathan Creek’s third season. The episode featured premonitions, goldfish and bizarre case of mistaken identity. In this podcast Gerry and Iain take a look at the power of dreams and late twentieth century recording devices.

The victim (and, as it turns out, the perpetrator), Andre Masson, was played by Terrence Hardiman and his wife, Delia, by another familiar face to British TV viewers, Diana Weston. James Gaddas played Craig Downey, who Masson tried to frame for his apparent murder. Elsewhere, Jonathan became acquainted with Heidi (Rebecca Front) and her aunt Audrey (Margery Mason) who kept seeing murders in her sleep. Paul Blackthorne and Damien Goodwin appeared as two men Maddy managed to mix up for one on a night out near the start of the episode.

There were small roles for Terry Bird as a security guard determined to keep Maddy away from Downey, Peter Blake as Otto Danziger and Claire Malcomson as Becky Philips, the second fatality foreseen by Audrey.

The Eyes of Tiresias was again written by the show’s creator, David Renwick. Keith Washington directed once more while Verity Lambert remained as producer.

The Eyes of Tiresias was released in 1999. It is 50 minutes long and originally aired on the BBC. The episode can be viewed on Netflix in the UK and Ireland and the entire series is available on DVD in the UK and other countries, including a comprehensive box set of all the episodes up until Christmas 2016, released by the BBC.