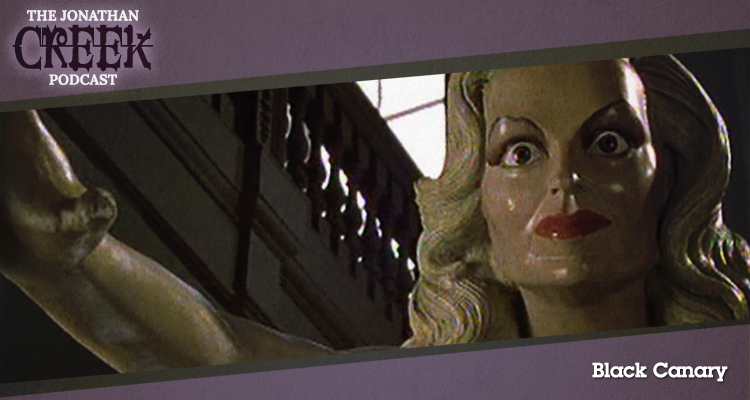 Black Canary was the Christmas Special of Jonathan Creek in 1998, between the show’s second and third seasons. The episode featured a seemingly impossible twice-executed suicide. In this podcast Gerry and Iain take a look at family dramas and the extinguishing of an old flame.

Hannah Gordon took centre stage as both Marella Carney and her twin Beryl, one the victim of a gruesome buzzsaw stunt gone wrong, the other dead at her own hand prior to manservant Lionel Prekopp’s (Murray Melvin) inventive intervention.

Marella and Beryl each had one daughter, Charlotte (Kate Isitt) and Hannah (Suzanna Hamilton), whose reactions to the latest death are made all the more complex when it is revealed one twin had been living the other’s life for many years. Francis Matthews appeared as Marella’s husband Jerry Bellinitus, while Vincent Wong (as Hannah’s fellow con-artist Pan Duc Lao), Dave Haskell (as Sgt. Richie of apparently undefined gender) and Sanjeev Bhaskar (as a typically hilarious doctor, tormenting Adam Klaus) also appeared.

The most significant guest star, however, was the late, great Rik Mayall as D.I. Gideon Pryke. Pryke presented as a formidable foil to Jonathan throughout the episode and is doubtless one of the most memorable characters in Creek‘s history.

Black Canary was again written by the show’s creator, David Renwick. Sandy Johnson returned behind the camera, while Verity Lambert remained as producer.

Black Canary was released in 1998. It is 89 minutes long and originally aired on the BBC. The episode can be viewed on Netflix in the UK and Ireland and the entire series is available on DVD in the UK and other countries, including a comprehensive box set of all the episodes up until Christmas 2016, released by the BBC.