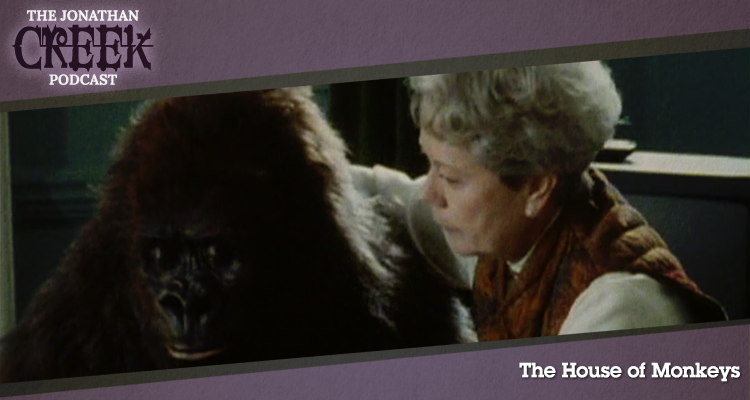 The House of Monkeys was the fifth and final episode of Jonathan Creek’s first season and presented another locked-room mystery with an apparently impossible escape. In this podcast Gerry and Iain take a look at a friendly gorilla and some apparently telling body language.

When Dr Ingrid Strange (Annette Crosbie) returns home to find her husband Dr Elliot Strange (Charles Kay) locked in his study, dead, with no apparent method of escape possible it doesn’t take her long to call on family friend Jonathan Creek to discover the grisly truth.

Simon Day and Sara Markland also appear, as the Stranges’ son Jordan and his actress wife Cathy, while there is a charming cameo from an animatronic great ape as Samson the gorilla. Selina Cadell and Barnaby Kay appear as police officers.

The House of Monkeys was again written by the show’s creator, David Renwick. Sandy Johnson remained in charge behind the camera, while Susan Belbin continued as producer.

The House of Monkeys was released in 1997. It is 59 minutes long and originally aired on the BBC. An abridged edition can be viewed on Netflix in the UK and Ireland and the original cuts are available on DVD in other countries, including a comprehensive box set of all the episodes up until Christmas 2016, released by the BBC.